This article first appeared in the Huffington Post on the 11th September 2015. 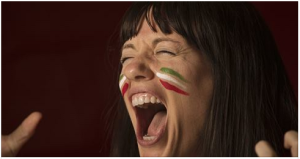 Music and sport are the perfect marriage; they are made for each other. The benefits of using music in sport and exercise is not new. Music grabs our attention, causing a reaction and it even changes how we feel. It can also help us remember things and overcome shyness. In addition, music make us feel good increasing our work output.

Now more than ever, music is being used in the workplace bringing happiness to staff and employees. I’ve witnessed this many times leading singing workshops. If you have happy staff, your bottom line is more than likely to be increased!

Not only are sports coaches using music as a tool to motivate and promote well-being among athletes, it has found a new platform. Performing artists and opera stars can reach billions via the sports arena. What do music and sport have in common? They can be enjoyed by everyone regardless of age, race, rank or religion.

One fine example is ‘Nessun Dorma‘ (None shall sleep) made ubiquitous by Luciano Pavarotti during the FIFA World Cup in 1990. Even non-opera fans recognised this show-stopping aria from ‘Turandot’ by Puccini. Also, Holst’s ‘I Vow to thee my country’ (1921), now re-named ‘World in Union’. This is now famously associated with Rugby World Cup.

There’s proof in the pudding

There is remarkable evidence where music improves the performance of athletes. Ethiopian long-distance runner, Haile Gebreselassie, broke the indoor 2000-metre record in 1998. He was synchronizing his stride rate to the rhythmical song Scatman. Also, the Great Britain bobsleigh squad at the 1998 Olympic Winter Games in Nagano, Japan, listened to Whitney Houston’s One Moment in Time. While they were training, they visualised themselves seizing the moment. In conclusion, they won the first Olympic medal for Britain. That hadn’t been achieved since 1964. When I train singers or groups of people for a performance, I love them to visualise a successful outcome.

There are some physical activities which lend themselves particularly well to musical accompaniment. Especially if they’re repetitive or arduous. For example, warm-ups, weight or circuit training and stretching. In each case, if music can match the rhythm and tempo of the activity, this will benefit the sportsman. I remember hearing how boxing champion Frank Bruno used to work-out to an opera track. He switched on the volume to full blast. No doubt the music spurred him on.

When music and rugby score a hit!

One of the joys of singing is how it breaks down barriers between people. It engages us immediately. ‘Celebrating Songs of the Nations’ supported by the RFU and Civic Pride Fund, brings together people who love music and sport. This takes place during the Rugby World Cup 2015. We learn one song from each of the 20 countries competing in the championship. Each song is a real hit. I’ve also discovered some fascinating songs from far-flung places. There’s even a song about catching insects? And when you leave a country, the local residents sing you a farewell? There’s one song written by a 17-year-old architect student that is now one of the most most famous tango dance songs in the world. It has over 200 arrangements!

I meet former Welsh Rugby team captain Andy Moore, who was hoping for ‘Bread of Heaven’ as the Welsh song.

As in the words of Benny and Bjorn’s, only one team can win in ‘The Winner Takes it all’.

But perhaps actor Richard Burton sums it succinctly, “Rugby is a wonderful show: dance, opera and, suddenly, the blood of a killing”.

‘Celebrating Songs of the Nations’

Singing workshops form part of a three-week music and drama festival in Richmond. This is for the local community and visitors to the area including fans and friends coming to the Rugby World Cup.
www.richmond.org.uk/musicanddrama

Posted in Our Reflections.

Helen trained at The Royal Academy of Music before achieving a highly successful career as an opera singer. Her wealth of knowledge and experience enables her to offer outstanding facilitation to organisations seeking to transform their staff